MMA Manager is out on Google Play! It’s an improved version of the iOS build with more fixes and tweaks and runs on everything running Android KitKat and above. It’s priced exactly the same as the iOS Build, ($1.99 US/$2.49 CAN/£1.98 GBP) and is available globally now.

Amazingly, without even telling anyone about it being out, it’s already got several very positive reviews on the Play Store

They go very nicely with the ones on iOS, which is currently sitting at 4.5 stars :).

Great news, Apple have passed the 1.1 update and we’ve hit the button to release it worldwide!

Why an update so soon?

It’s almost all changes we’ve made based on feedback, both directly from players and forums and iTunes reviews.

The biggest change in this build is a major rebalancing and bug fix of the Fight Simulation to be more fair and understandable to the player.  The main changes with it are that fighters with even just a 5 point advantage in a particular Stat are going to have an advantage against their opponent  in that Stat and the Stats are always taken to in account correctly in every fight.

When you’re choosing an opponent you can now see all their Stats like the tale of the tape so you can better decide if your fighter is ready for the challenge.  This is what it looks like: 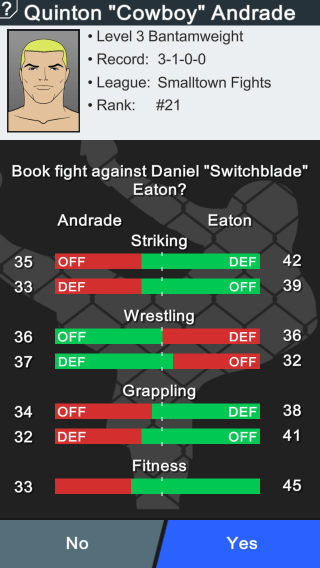 Much clearer!  With these details I can plan ahead and make decisions based on what I think my fighter’s strong points are and make training decisions to shore up weak points before the fight.

The Team History Screen is within the Gym screen and keeps track of and shows your Gym’s overall record and which titles your fighters have won. 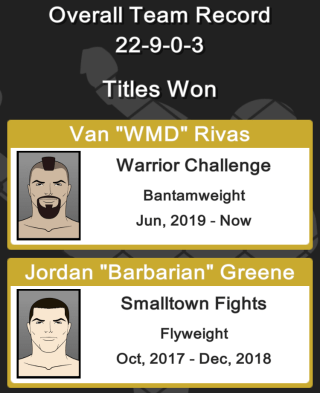 The Options screen now has a difficulty toggle if you’re still finding the fights a little too difficult or just want to coast a bit.  The 2 modes are the slightly easier “Reality TV” mode and the “Pay Per View” mode for playing MMA Manager when you want more of a challenge. 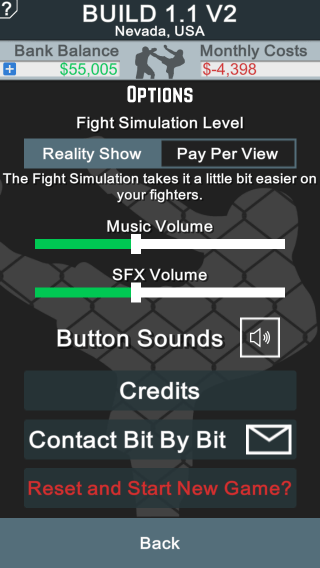 The build also has several other fixes including but not limited to:

There’s a infrequent issue where fighters stats aren’t properly being taken into account in the fights.  This is fixed in the next version that’s submitted to Apple and hopefully should be out next week.  However in the meantime if you feel like your fighters are unfairly losing repeatedly, the issue can be alleviated by closing the game fully (terminating the app) and restarting the app.